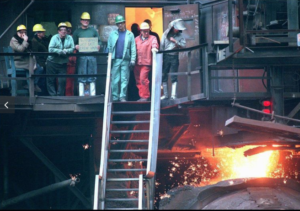 From the desk of James P. Cinelli, PE, BCEE

South Bethlehem, Pennsylvania claims one of the largest brownfield redevelopment sites in the nation encompassing 1,800 acres. This site, along the banks of the Lehigh Canal, was home to Bethlehem Steel and an amazing example of an environmental transformation that laid the foundation for a renewal of the region. As an environmental consultant with a portfolio of successful brownfield redevelopment projects, I continue to be in awe of how the developers wove the industrial heritage of the site, through adaptive reuse and preservation, into this into a vibrant mixed-use center. However, long before the Bethlehem Steel brownfield redevelopment story could be shared and celebrated, one of the world’s largest steel producing companies was in big trouble – trouble that eventually led to the collapse of the company, a demise captured by a journalist who had long covered the industry giant. Nearly 35 years since its original publish date, the accounts shared will challenge your thoughts on the importance of corporate culture in any business.

As a civil engineering student at Lehigh University in the late 1980s, I saw many business students carrying around a copy of a book that was very relevant to both our university’s location and the state of manufacturing in America at that time. The book, Crisis in Bethlehem: Big Steel’s Struggle to Survive, was written by a former editor of the Bethlehem Globe-Times, John Strohmeyer. The book gives a detailed account of the collapse of Bethlehem Steel, a corporate mammoth that at one time employed 180,000 people. It’s a fantastic book that I highly recommend.

As a small business owner, I tend to appreciate books that tell stories of business success and failure over books that preach business practices. Not that there aren’t a lot of large-selling business books that have helped people start and/or fix their businesses, but for me actual rags-to-riches or riches-to-rags biographical business stories resonate better. They stay in my memory much longer that a book of the top ten what-to-do or top eight what-not-to-do messages. Crisis in Bethlehem is without a doubt the most telling example of how a company’s philosophies and management decisions, decisions that served the business well during boom times, ultimately were disastrous in an evolving environment of higher competition. It’s a story of how corporate culture can destroy a company, even one that experienced over $300 million in annual profits for decades.

The one word that comes to mind more than any other in characterizing the fall of Bethlehem Steel is “complacency”. When union negotiations came along every few years, management gave the unions what they wanted, and simply raised the price of steel to cover the costs. Easy, right? Steel workers in America eventually were making substantially higher wages than any other manufacturing sector. Then there was the disastrous contract term, “past practice”, agreed to in the early 1960s. When technology improvements resulted in efficiencies that reduced the amount of labor needed, steel companies were not able to reduce the amount of workers assigned to a task. Literally, when a job that required four people now only required three people, the crew members would take turns taking naps! But things were so good for so long that when this practice was introduced in a union contract, management glossed over it, and the results were catastrophic.

Another example of complacency by Big Steel was the failure to adopt new technology. The steel companies spent millions of dollars on research and development, but ignored many of the recommendations of their R&D departments. After World War II, as Germany and Japan began to rebuild, their steel mills were built with state-of-the-art technology, while the American steel companies were still using technology that was decades old. With much lower labor costs, the Germans and Japanese could produce high-quality steel at a fraction of the cost of the American steelmakers. Even with the high cost of transportation, their product was priced lower than American-made steel.

Big Steel also started to see pressure from American mini-mills. These steel mills, which mainly produced small items that the major steelmakers weren’t interested in, eventually expanded their operations to produce larger steel products and compete with Big Steel. Mini-mills were non-union and forward-thinking with all employees, including laborers, participating in profit-sharing plans. Without the high labor costs of the major steelmakers and the implementation new steelmaking technologies used in other parts of the world, the mini-mills started taking a piece of Big Steel’s business.

There are a lot of ways to lay blame for the fall of Bethlehem Steel – greedy unions, failure to modernize, etc. But really what it comes down to is a rigid and complacent corporate culture that evolved over many years of success. The culture that was established sent the message: “We’ve been so successful for so long doing things the same way, why would we change?” This attitude proved to be toxic when the company was faced with mounting competition. Successes of other  steel companies like Nucor Steel show how fostering an open exchange of ideas from all levels of the organization, making financial performance transparent, and prioritizing technology over profits, creates a culture that gives employees a feeling of ownership and self-worth and ensures the company’s long-term financial stability. Possibly the best lesson on corporate culture I’ve ever read, the Crisis in Bethlehem story will stick with me for a long time.